Bekky Beukes’ works in the Welcome to the Circus collection include (left to right) “Flamingo,” “Peacock,” “Zebra,” “Slave” and a sketch series triptych at the center below. Photos by Daniel Veintimilla.

Local art lovers and St. Pete scenesters stepped right up for Bekky Beukes’ reception for her new show, Welcome to the Circus, at the downtown St. Petersburg bar Blue Goose on Saturday, Aug. 6.

The exhibition by the Tampa-based artist will be up through Sept. 3 and features playfully mysterious works that call on the viewer to question preconceived ideas about identity via dreamlike animal-female hybrids.

Blue Goose’s exposed brick wall provides an attractive backdrop for visual art displays, and its eclectic crowd and comfy setting make the spacious venue an ideal spot for both taking in art and mingling. 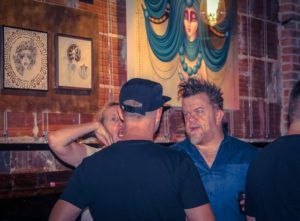 Metal sculptor and mixed-media artist Frank Strunk (right) was among the familiar faces at the event. Inspired by the words of philosopher Anita Krizzan — “a golden cage is still just a cage” — One might conclude that Bekky Beukes created the green-tressed “Slave” to ponder the limitations, both real and imagined, that beset people — especially women. The Sketch Series, along with “Slave” and a few other standouts, became a focal point of the show, drawing the eye with detailed illustrations and ethereal subjects. Says Beukes: “This ‘collection within the collection’ marked the beginning of my circus dreams. Although none of the sketches became paintings, they inspired the direction. Conceptualizing for me happens during ‘witch hour’ between 3 and 4 a.m. typically. I will sketch an idea as it arrives, the challenge is portraying the form in a manner whereby words become irrelevant.” The pieces sold at the show. Popular St. Pete artist and curator Chad Mize, known for his pop-culture-iffic Chizzy brand, stopped in for the show. Beukes sold “Zebra” and says she adores this piece and the flamingo for the freedom they forced her to explore. “Up close I have left graphite marks and allowed the paint to fall carelessly off the edge of the canvas,” she says. “I was liberated in so many ways through this work, like exhaling after being underwater for years.” Art lovers of all ages gathered for Bekky Beukes’ show at Blue Goose.